Out of the Mouths of Babes: Our Hydrogen Future 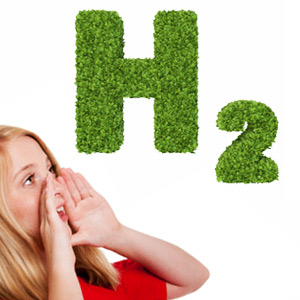 I just test drove a Toyota Mirai — the first hydrogen fuel cell car to be sold in the United States! It has an electric motor but is powered by gaseous hydrogen instead of batteries.

Wondering what hydrogen power is?

Listen to what the kids say about why we shoulddrop oil and embrace hydrogen!

Back in 1998, my eldest daughter Nicole built a fuel cell with her classmates at Merit Academy. They were fed up with the Gulf War (and that was just the start of wars over oil) and after a class debate, they launched a campaign to educate the public about clean alternative energy sources like solar hydrogen. Nicole and her friend Joanne became the first middle school students to ever build a hydrogen fuel cell.

Nicole continued to do educational outreach throughout high school and gave demonstrations at the Hart Senate Building before Congress in Washington DC and across America at conventions and college/high school campuses.

Intrigued by alternative energy possibilities, my youngest daughter Jaclyn invited energy experts for a forum at Merit Academy. She explored alcohol fuel, biomass, and other alternatives but came back to hydrogen as the cleanest and most promising energy solution. Jaclyn started Kids 4 Hydrogen in 2004 and focused on converting internal combustion engine (ICE) cars to use gaseous hydrogen. Getting resistance from the Dept of Energy, auto manufacturers, and oil companies only fueled her passion for converting the 320 million cars on the road in the United States.

In 2012, Michael Beck took the helm at Kids 4 Hydrogen. He researched the revitalization of hydrogen as an energy source and led the team on a 10-Day tour with a Mercedes F-Cell through California.

In 2013, Lexie Lyons created a whiteboard video that best describes why hydrogen is going to be a vital part of our energy future. Although this Indiegogo campaign is over, the message still resonates: