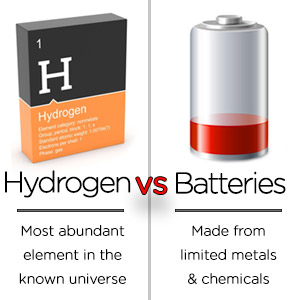 There seems to be a lot of confusion about the difference between electric-powered battery cars and hydrogen-powered fuel cell cars. It’s really quite simple!

Elon Musk of Tesla has been making a lot of noise about the superiority of batteries over hydrogen. Not sure why he is trying to create a divide in these clean alternative energy storage systems, when he should be joining forces with the hydrogen innovators.  Shouldn’t the “bad guy” be the oil companies?

It’s curious to me that Musk prefers batteries when, if all things were equal (motors, car bodies, tires), batteries lose substantial charge over time while hydrogen will never lose any potential energy. You know that batteries die off in just a few days, but hydrogen stays constant forever.

What’s worse is that at the end of the battery’s life, it needs to be taken to hazardous materials sites because it contains dangerous chemicals and rare earth or highly toxic metals like cadmium, lithium or lead. Hydrogen, on the other hand, simply combines with oxygen to make electricity and the only by-product is pure water.

Electric cars that run on batteries have a prohibitively short range — around 40 to 100 miles per charge. Fuel cell cars, on the other hand, have an average range of 300 miles per tank. Charging batteries takes anywhere from 4-20 hours (depending on the battery and the power source), while filling a hydrogen tank only takes about 3 minutes.

This isn’t a battery vs hydrogen battle.  Hydrogen fuel cell cars use a few small batteries to power accessory devices. I just find it aggravating to see so much misinformation being put out there about hydrogen when we should be doing everything possible to stop using petroleum and natural gas.