« What is a Fuel Cell?
Batteries vs Hydrogen » 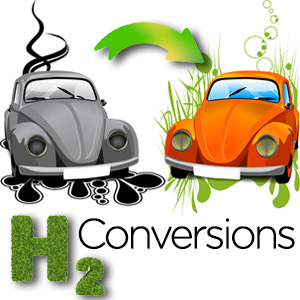 With over one billion internal combustion engine (ICE) vehicles on the road — and spewing CO2 into the atmosphere — today, the most efficient way to reverse this is to convert ICE cars to use gaseous hydrogen.

The team members at Kids 4 Hydrogen are actively finding safe ways to do these conversions. Because it’s not practical to junk all of these cars, we really do need to convert them in order to have any positive effect on our atmosphere.

Yes and no.  Yes, there’s only one way to deal with the one billion cars on earth.  We need to change the energy they use to something that has zero emissions. Yup. ZERO EMISSIONS.

Well, we all know gasoline is NOT THE ANSWER. It’s too expensive to remove an ICE and replace it with an electric motor. So, the only viable way to continue to utilize the one billion ICE cars is to convert them to use gaseous hydrogen.  That would mean that all billion cars on the roads today would spew ZERO EMISSIONS.

So what about the NO? No because the oil companies don’t want us to convert our ICE cars.  That would mean that we wouldn’t be buying gasoline at the corporate gasoline stations around the world. Which would in turn mean that they wouldn’t continue to enjoy the billions of dollars of profit they make each year on gasoline sales.  These oil companies are so powerful that they have a stranglehold on car manufacturers and our government officials are in their pockets. So it’s not going to be easy LOGISTICALLY or POLITICALLY to convert our cars to using gaseous hydrogen.

Several scientists and innovators have successfully converted ICE cars in the past. It’s not a difficult process.  They’re testing storage tanks to find the most efficient way to store hydrogen in existing cars. I am so excited about this that I am donating my own car to the project.

I can’t wait to drive my own hydrogen-powered ICE car!

This entry was posted by Patrick on September 2, 2015 at 10:22 pm, and is filed under Uncategorized. Follow any responses to this post through RSS 2.0.Responses are currently closed, but you can trackback from your own site.