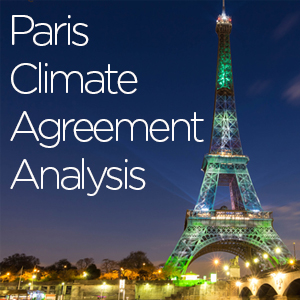 Today’s guest post is by Joe Jordan. Joe worked in the atmospheric and space sciences for decades at NASA’s Ames Research Center (Bay Area), before teaching at Cabrillo College and in the meteorology/climate, mathematics, and environmental sciences departments at San Jose State University.  In addition, he has done science media work (especially radio), and leads occasional public outings featuring astronomy/stargazing and “physics in nature”.

The recent Paris climate agreement was significant in that most of the world (almost 200 countries) agreed to something!  But, alas, it was insignificant in that what they agreed on is almost nothing compared to what we need now.

Scientific fact is that even if the whole world completely stops emitting carbon right now (i.e., a 100% cut), the average global atmospheric temperature will not be going down anytime soon (we’re talking centuries to millennia).  Voluntary promises to limit national emissions and global temperature rise amount to a kind of wishing exercise, absent the kind of economic incentives that would be provided by a steeply increasing price on carbon.   See the advocacy work of Citizens’ Climate Lobby for extensive presentation and discussion of this highly valuable concept (CCL’s version is known as “fee and dividend”, which harnesses market forces in a revenue-neutral way with no increase in the size of government).

It’s great to be devoting some new funding to deployment of renewable energy (solar, wind, etc.) in the developing world, but we really need to “up the ante” on this, planet-wide, by an order of magnitude (i.e., factor of ten).  We need a quick yet deep “makeover” of energy infrastructure everywhere, but the Paris agreement doesn’t provide real clues on how that’s to happen.  Again, governments must squarely face the necessity to make carbon-burning more and more expensive, in order to keep fossil fuels in the ground so renewables at last have a real chance to flourish.

Furthermore, we need to not only halt all or most carbon emissions as soon as is superhumanly possible, but actually start extracting carbon from the atmosphere, in a big way.  Nobody has yet shown how to do this in a way that’s anywhere near feasible economically or ecologically — but it’s an extremely important as well as potentially exciting (and even lucrative) project that people need to get on their radar screens. The more we can do now (and soon) to develop a much more advanced, sophisticated energy landscape (befitting a life form that fancies itself as “intelligent”), the less suffering will be experienced by the future generations to whom so much of this blog series is devoted.

This entry was posted by Patrick on December 17, 2016 at 10:03 pm, and is filed under Uncategorized. Follow any responses to this post through RSS 2.0.Responses are currently closed, but you can trackback from your own site.